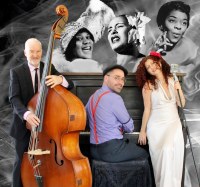 LISTEN to stories of their short incredible lives, SEE images that will enhance the delivery of each song but mostly FEEL the power & soul  of this incredible trio’s interpretations of superb masterpieces like AIN’T MISBEHAVIN’, MAKIN’ WHOOPEE! & ST. LOUIS BLUES that will evoke the emotion these ladies deserve.

Bessie, Billie & Dinah! Three pioneering black female vocalists of the early 20th Century, even with their lives cut so short, so early, made their mark in the Musical World leaving us unforgettable songs full of life, love & laughter, but also of sadness, hope & hard-times.

Join Bonnie Lee Galea on voice, Quinton Dunne, from The Beggars, on Double Bass, Richard Coates on Keys  & Josh Chenoweth on Trumpet in remembering Bessie Billie & Dinah in a show that will have you LAUGHING, CRYING & maybe even SINGING along to songs like SEND ME TO THE ELECTRIC CHAIR!!

“We all thoroughly enjoyed the show. The unknown back stories on Bessie, Billie and Dinah were particularly enlightening-sad, funny and tragic. Bonnie’s voice is so well suited to the portrayal of these amazing women and backed so fabulously by Quinton Dunne and Richard Coates”  Kathy Bergland, SA, March 2017

Loved the show … Bonnie and her band’s tribute to these 3 blues legends was brilliant!! Anne Mitchell, SA, March 2017

Bonnie Galea and her trio performed like consummate professionals in a challenging venue during the Adelaide Fringe.   Her ‘Bessie, Billie and Dinah’ Show was well executed, brilliantly played by Quinton Dunne and Richard Coates and sung to perfection by Bonnie. Debra Thorsen, Event Organiser ‘The Port Rocks’ & ‘Semaphore Music Festival’ [SA] 2017

Bessie Smith, Billie Holiday and Dinah Washington are icons of jazz. All suffered the double prejudice of being female and black, during the days of segregation. And each had an influence on the next. So pulling them together makes sense for a cabaret show.Each of the eponymous singers is given half a dozen songs, with chat about their life.

Bessie’s darkly funny Send Me to the ‘Lectric Chair, which Galea got the audience singing along to. Moving onto Billie Holliday, we were treated to God Bless the Child, Gloomy Sunday and Loverman, Finally, Dinah Washington’s Ain’t Misbehavin’, Teach Me Tonight and Makin’ Whoopee, finishing with her big hit What a Difference a Day Makes.

“This is a show exploring the music of 3 particular jazz singers, Bessie Smith, Billie Holiday and Dinah Washington.”  “Bonnie is to be applauded for reminding us about this largely forgotten singer.” “The connection between them is that they lived tormented lives, and died tragically at an early age.” “Meanwhile, sit back with a glass of wine and enjoy some of the great songs this show has to offer.”  Adelaide Fringe 2016 Review, CLOTHESLINE Magazine SA